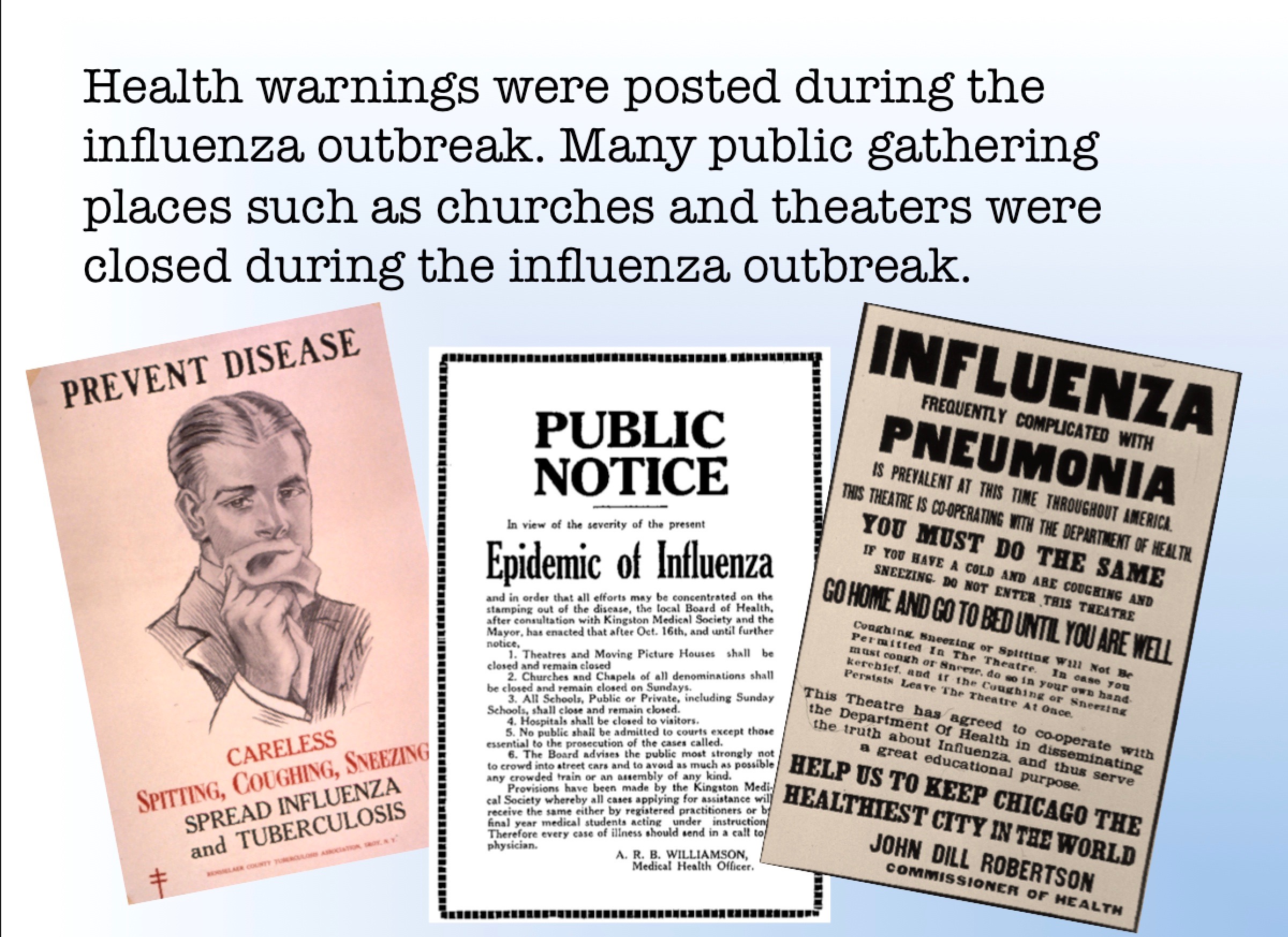 Health warnings were posted to discourage spitting in public places, to encourage the use of handkerchiefs when coughing or sneezing, and to stay home if sick.

In many communities, masks were required to be worn while using public transportation such as trains and street cars or whenever one was outside one's residence. Churches, schools, theaters, and other sites where the general public assembled were closed down at various times during the cycles of the influenza pandemic. 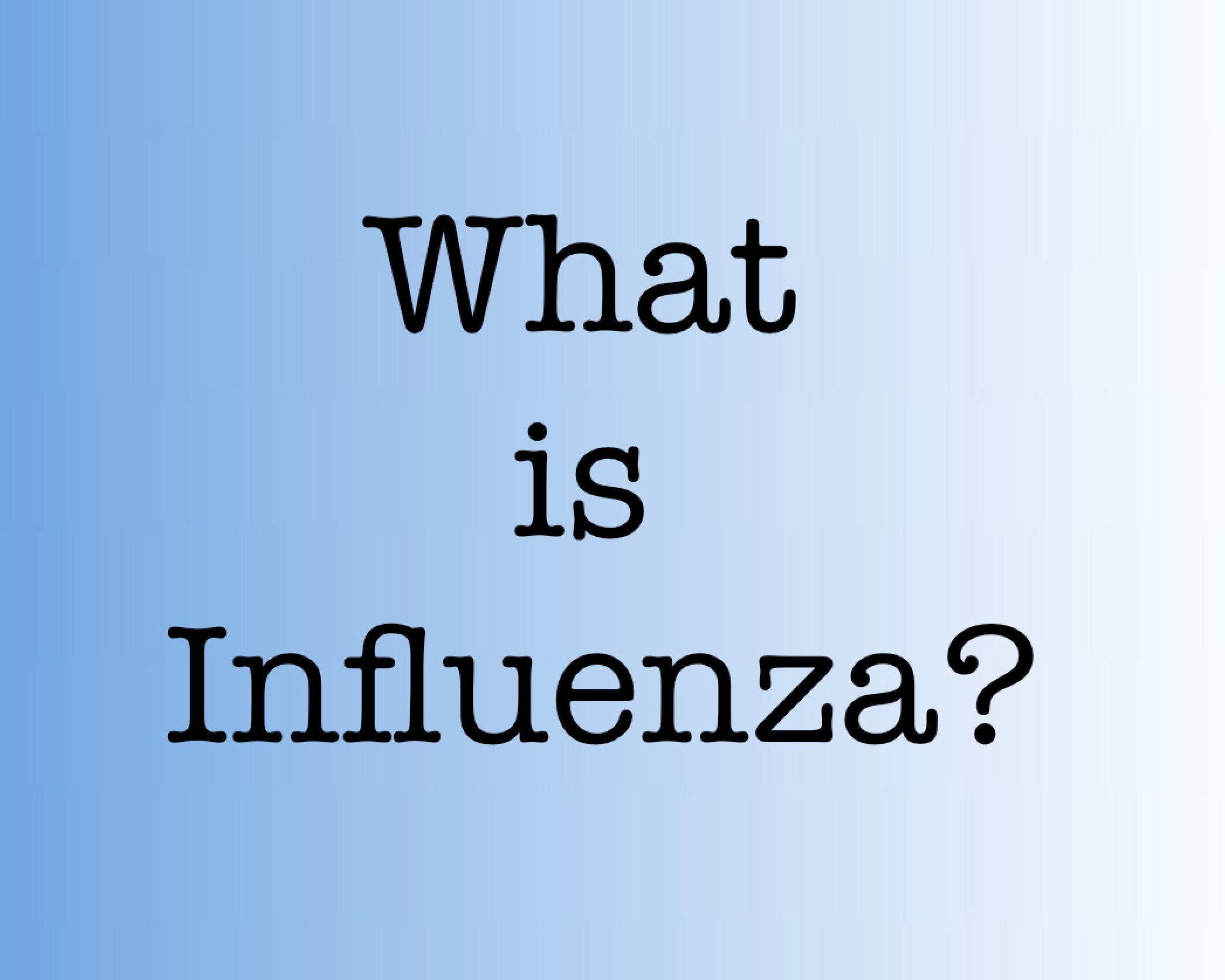 Influenza is a contagious respiratory illness caused by influenza A or B viruses. The flu comes on suddenly with symptoms that usually include fever, chills, cough, body aches, headache and fatigue. Some individuals may also experience additional symptoms such as stuffy nose, sore throat, and sneezing.

The majority of influenza cases in the USA occur in the fall and winter seasons. 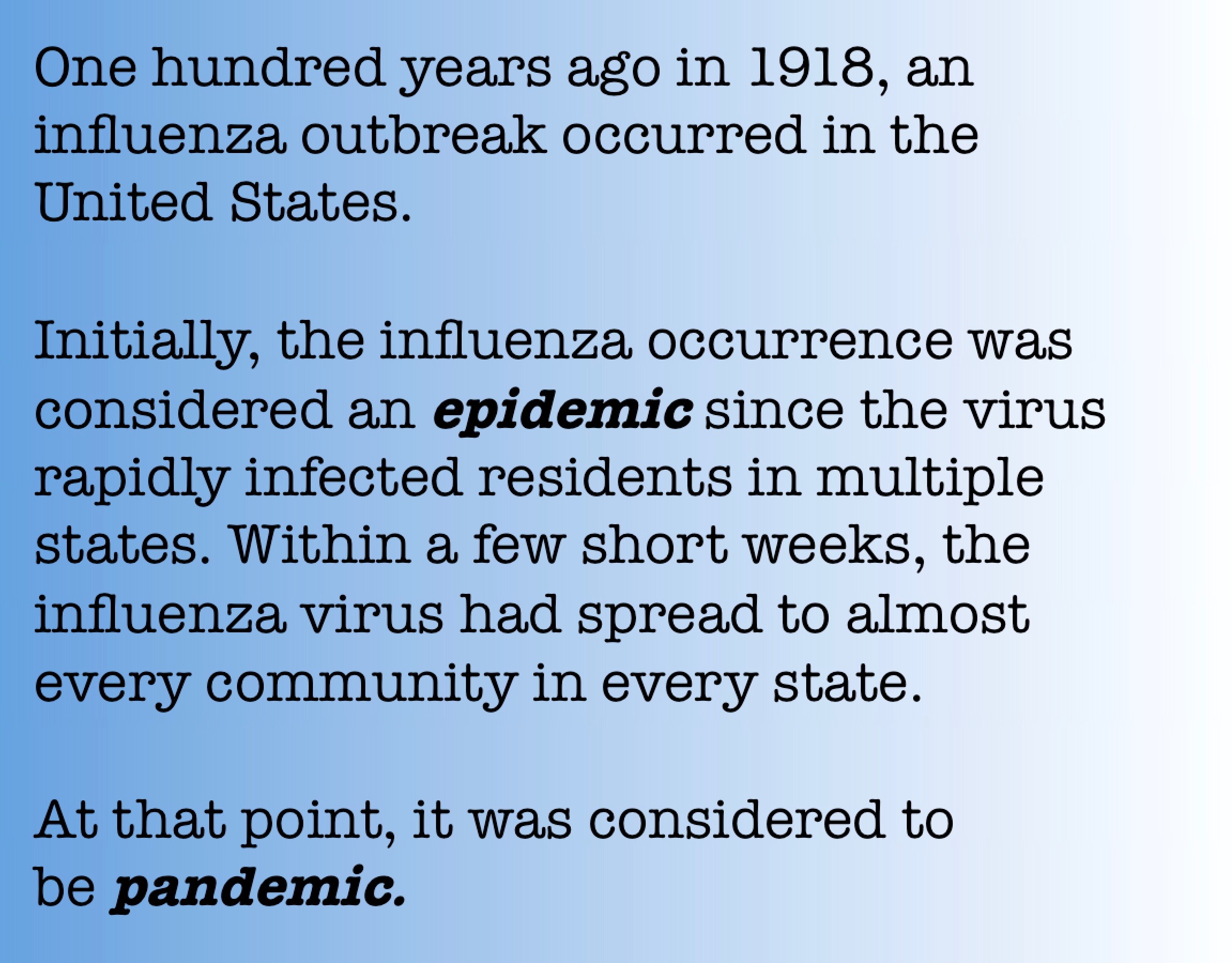 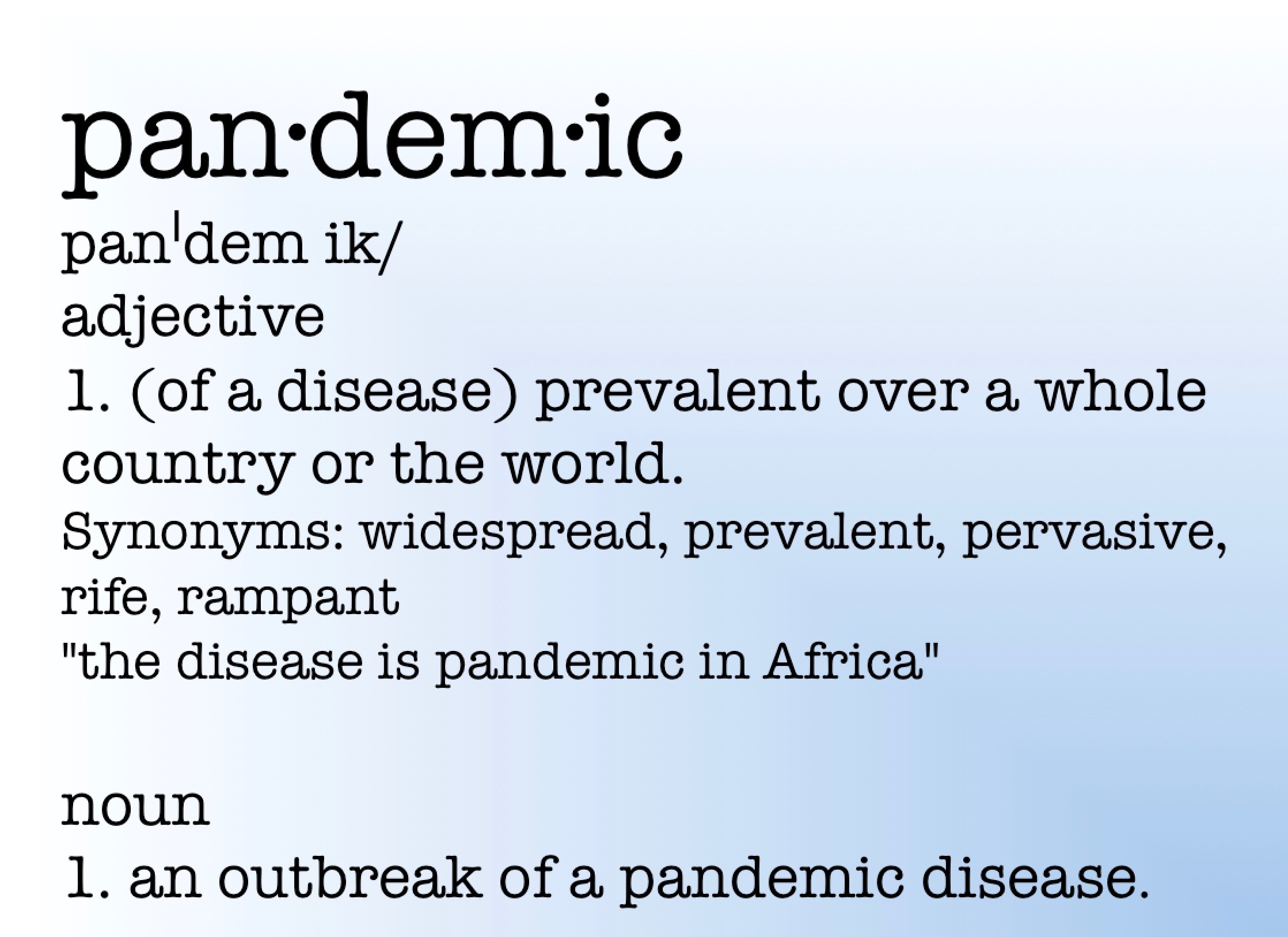 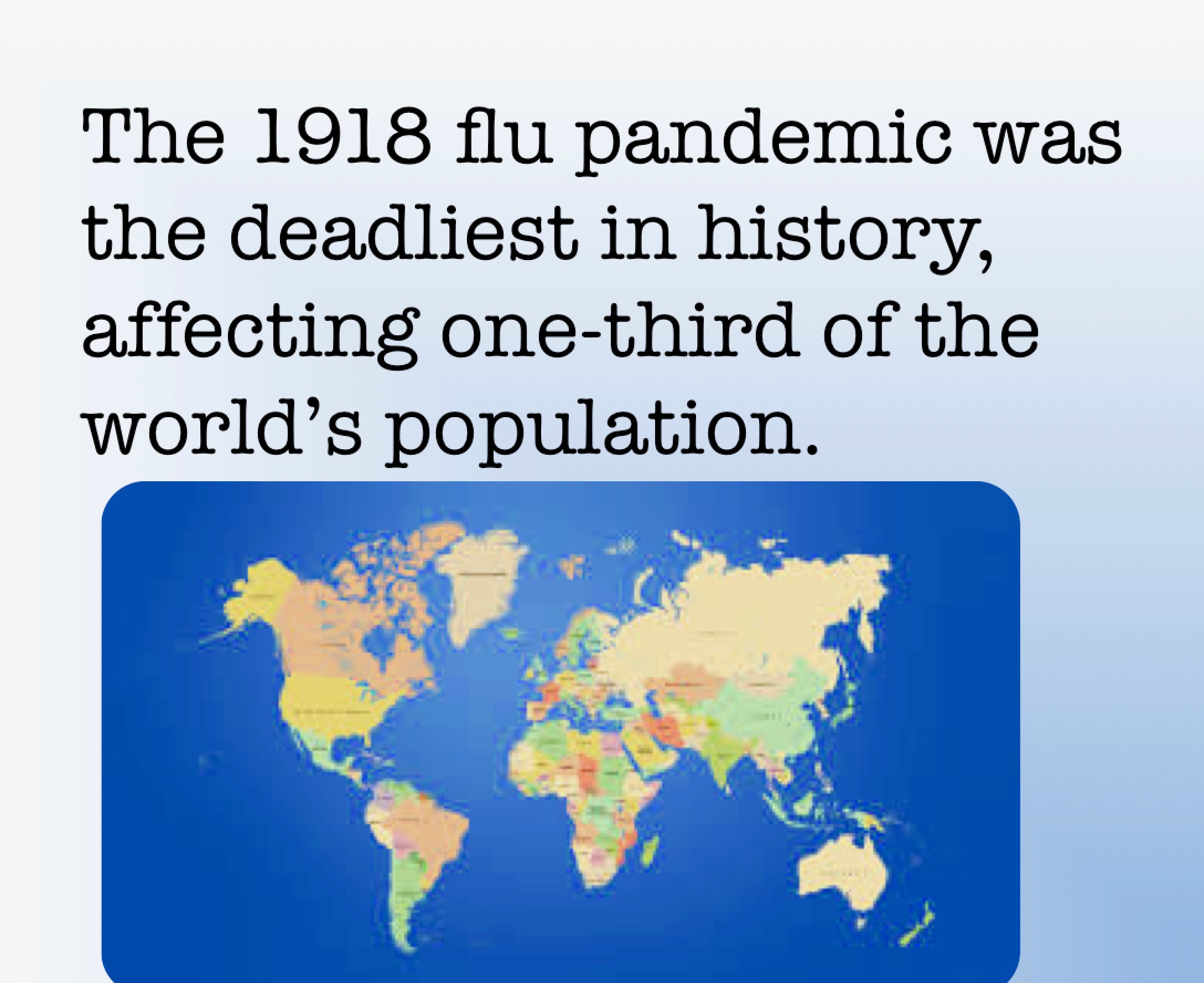 The deadliest influenza outbreak in history began in 1918. The 1918 influenza pandemic, also known as "Spanish Influenza", affected nearly one-third of the world's population. The H1N1 influenza virus rapidly spread across the United States and affected 100% of the country within five weeks from the initial outbreak.

Although sometimes called the Spanish flu, the virus did not originate in Spain. During WWI, Spain was neutral so did not have media blackouts like those countries actively fighting did. Therefore, when Spain reported on the influenza virus affecting its residents while other countries hid that news, people erroneously assumed the influenza pandemic originated in Spain. 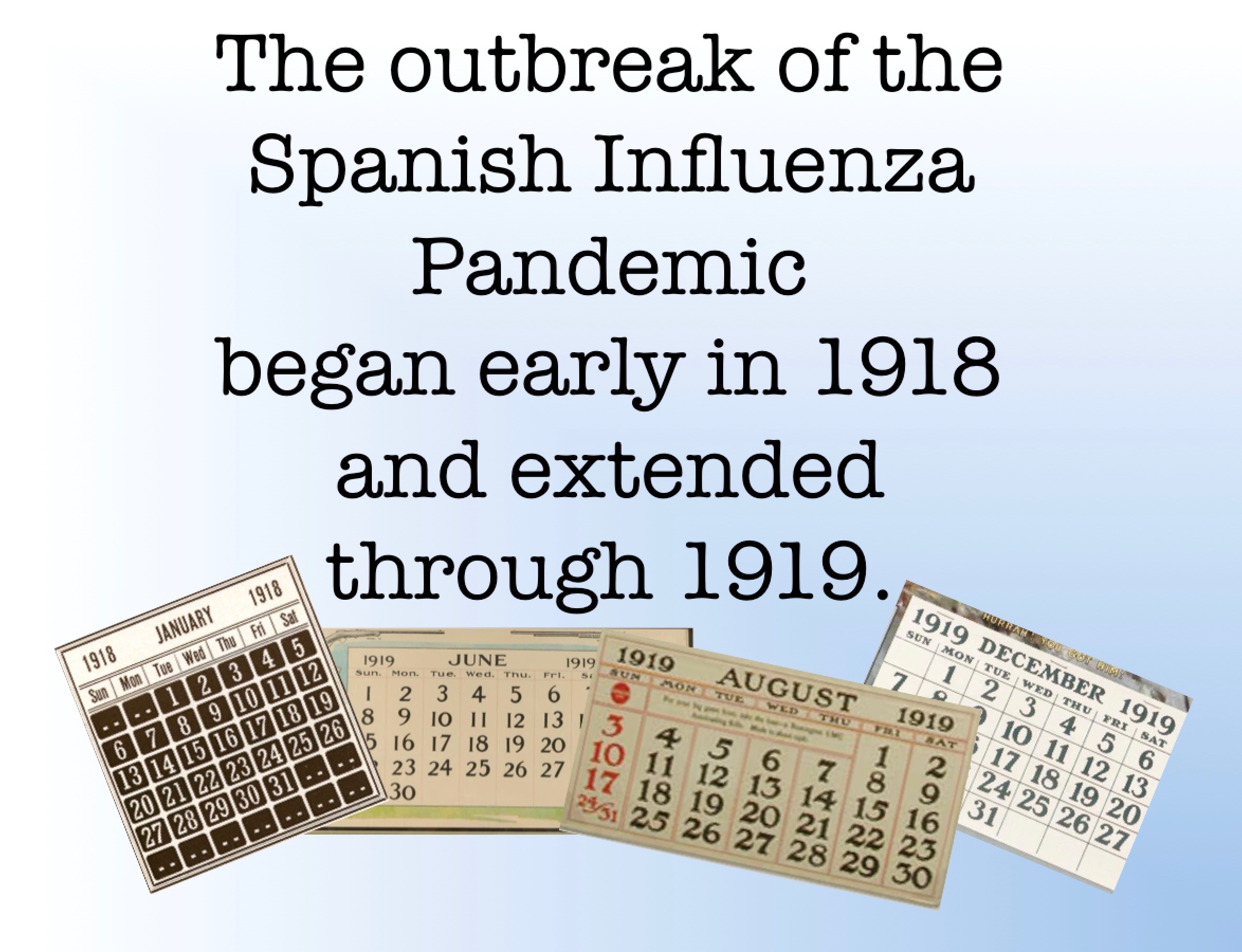 Duration of the Pandemic

The pandemic began in the United States in early 1918. The influenza pandemic appearred in three waves, extending until late in the year of 1919. 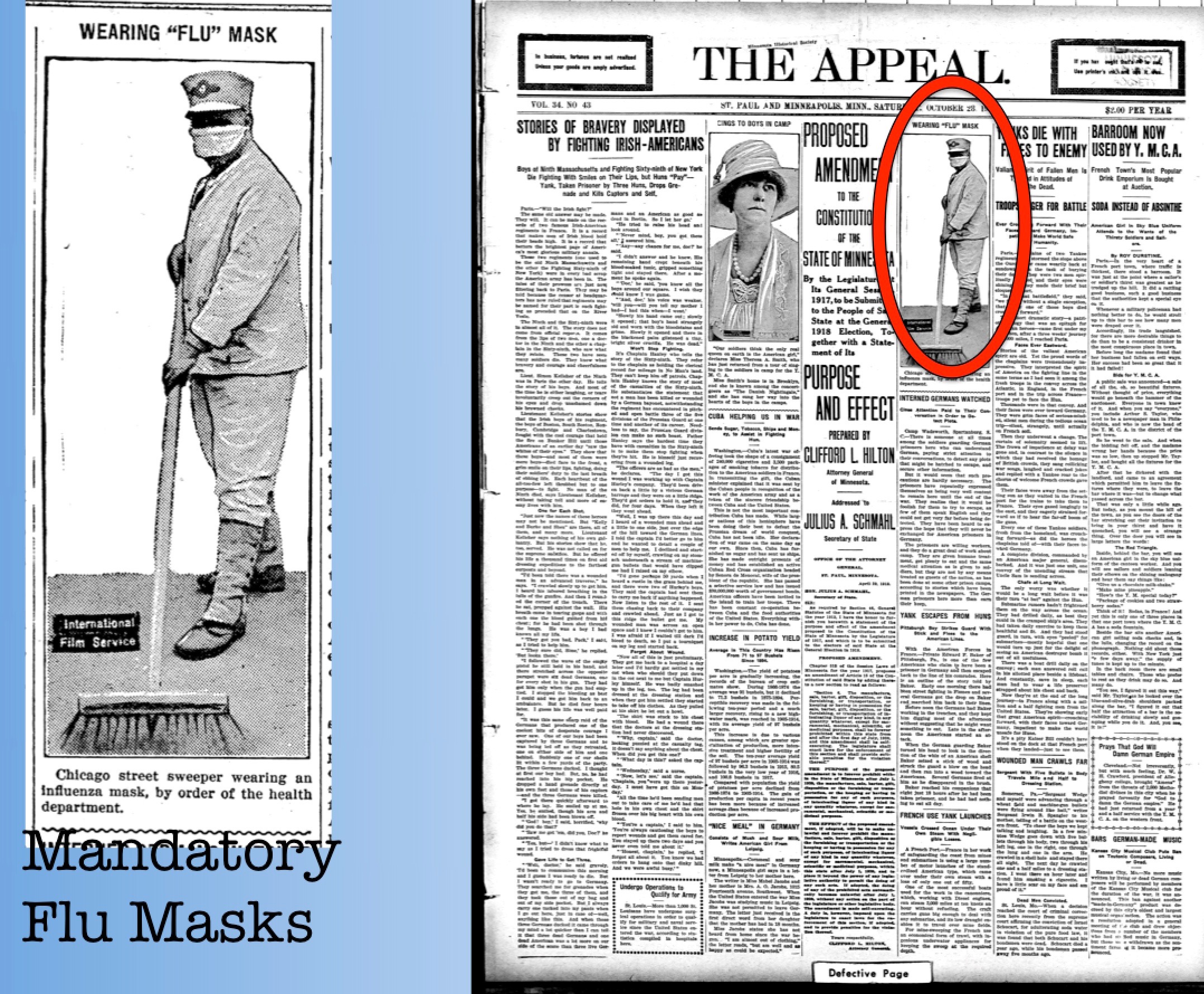 In this October 28, 1918 edition of "The Appeal", a Chicago street sweeper is pictured wearing a mask that was required by the health department.

During the 1918-1919 influenza pandemic, many communities required their employees and residents to wear a mask when in public places. 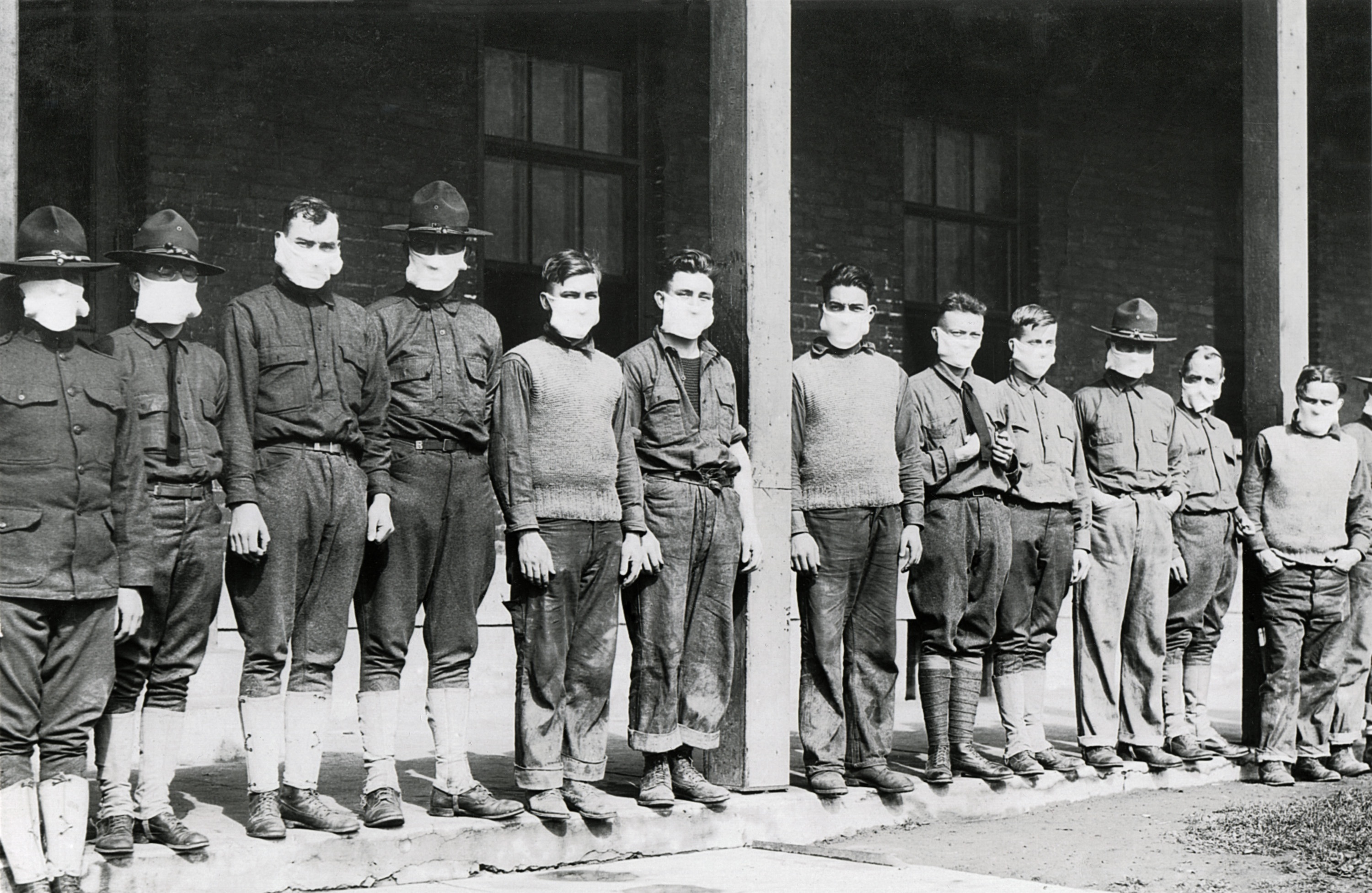 In this November 19, 1918 photo, the medical staff at the army hospital in Fort Porter, New York are shown wearing their protective masks while treating fellow soldiers during the Spanish Influenza outbreak. 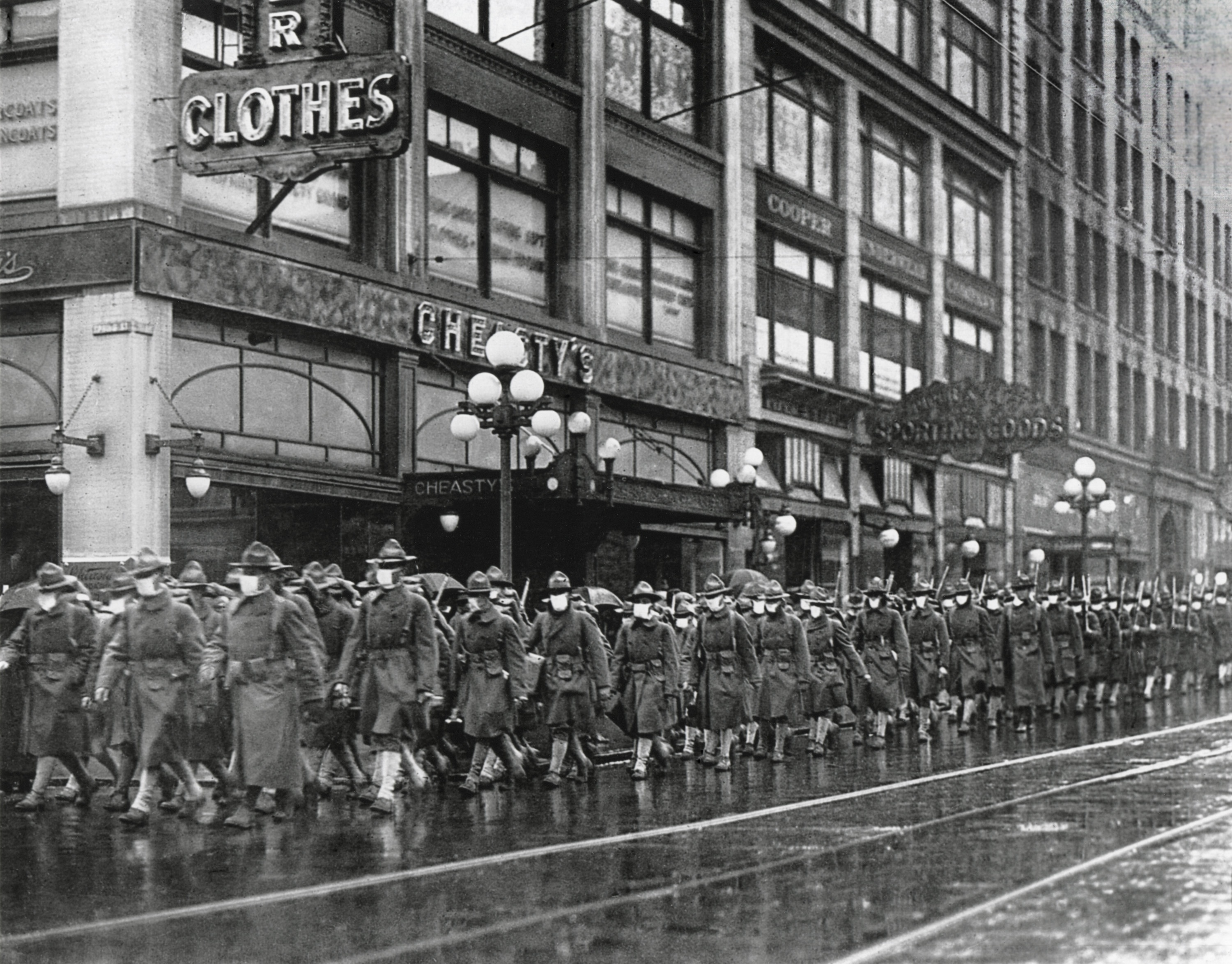 In December 1918, the U.S. 39th regiment in Seattle wore masks to prevent influenza as they were on their way to France during the 1918-19 'Spanish' Influenza pandemic. 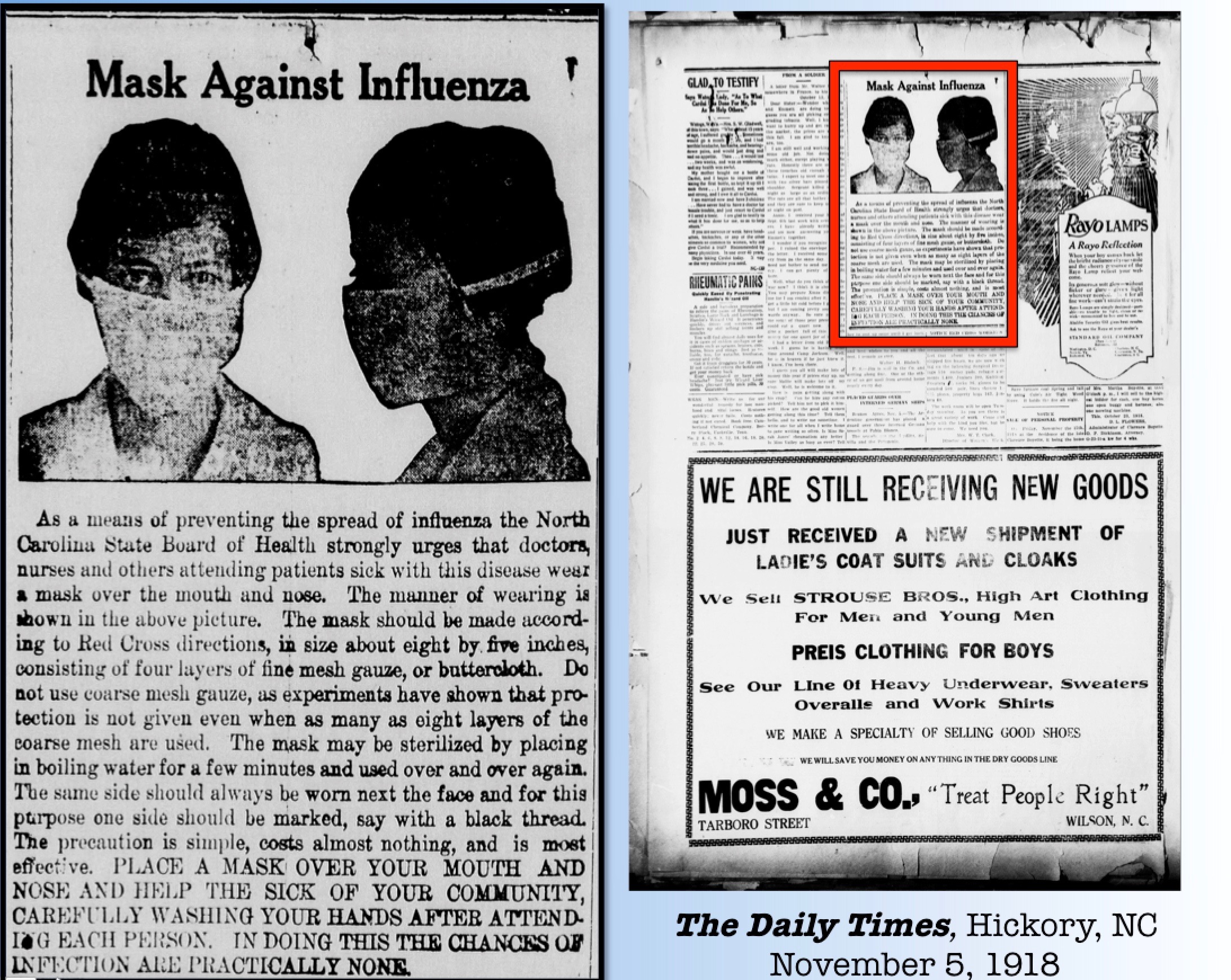 In this November 5, 1918 newspaper article in "The Daily Times" from Hickory, North Carolina, masks were recommended for doctors, nurses, and others caring for sick patients. The article recommended masks made from several layers of folded gauze or buttercloth (cheesecloth) which could be boiled and reworn. Handwashing between patients was also stressed. 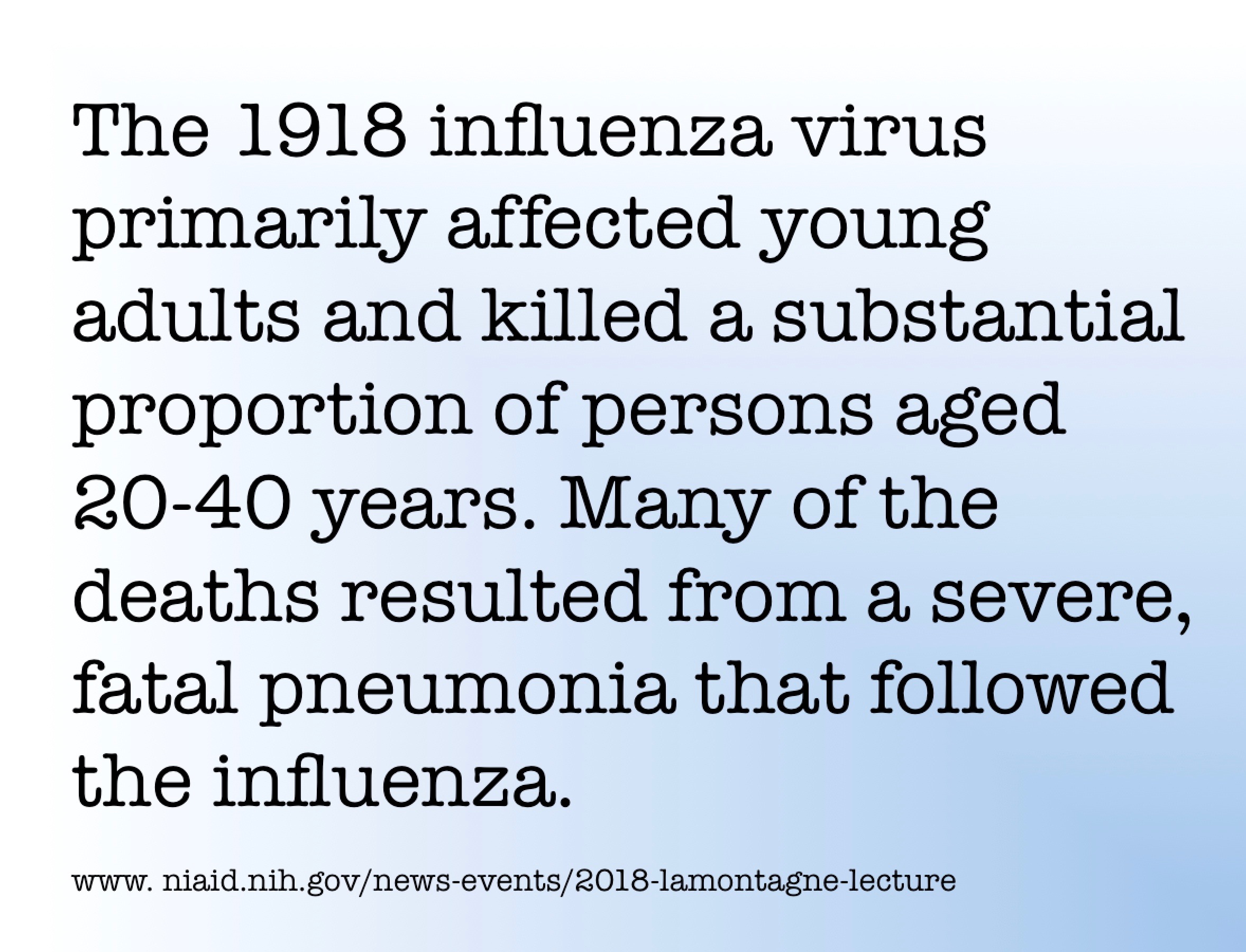 Historically, the incidence of influenza is higher in the very young and the elderly populations.

The incidence of those infected with the 1918-1919 influenza virus was much higher among those aged 20-40 years than normal and the mortality rate among that same age group was also higher than in the very young or the elderly populations. 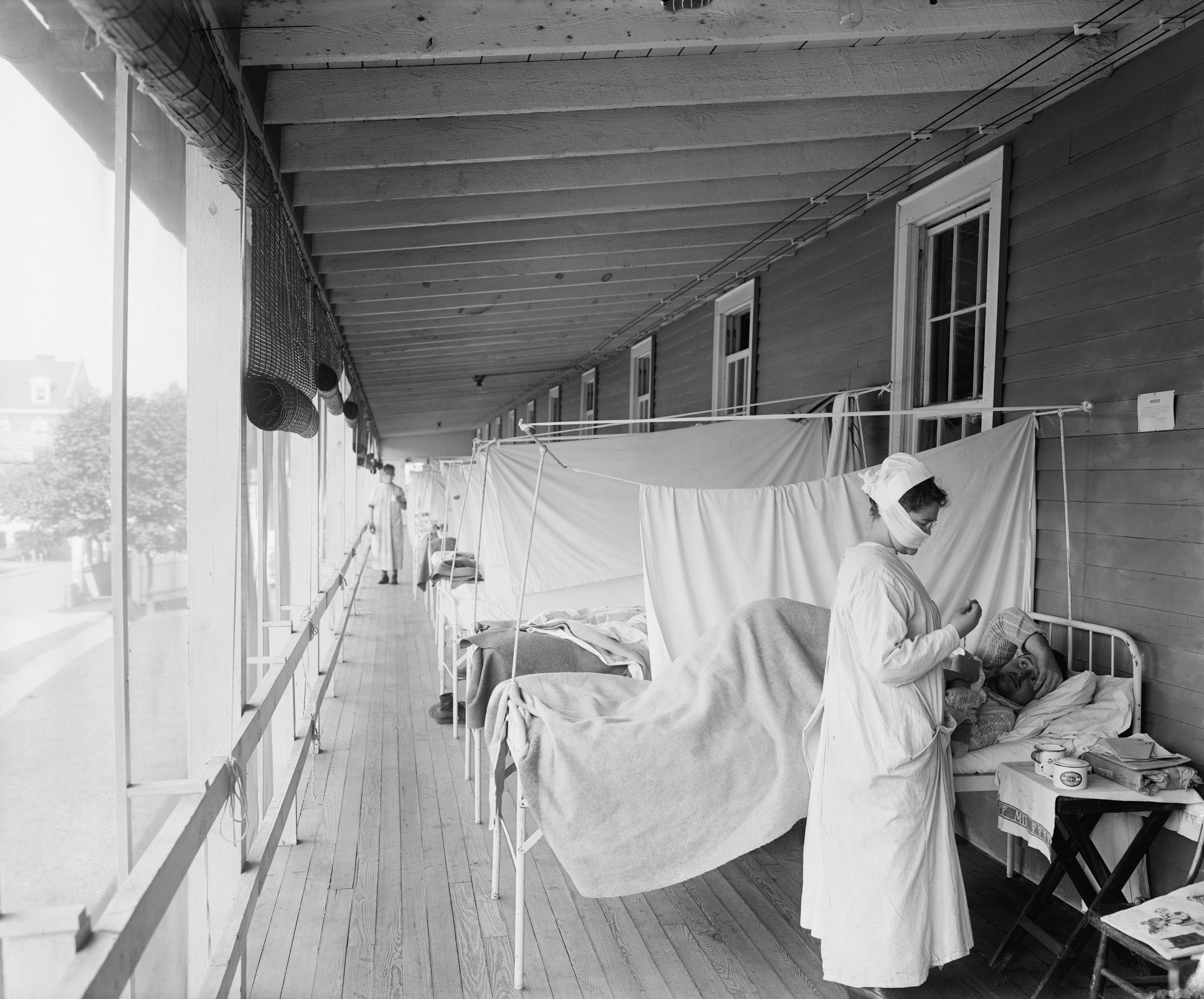 This photo was taken in Washington, DC at Walter Reed Hospital's flu ward during the Spanish Flu epidemic of 1918-19. 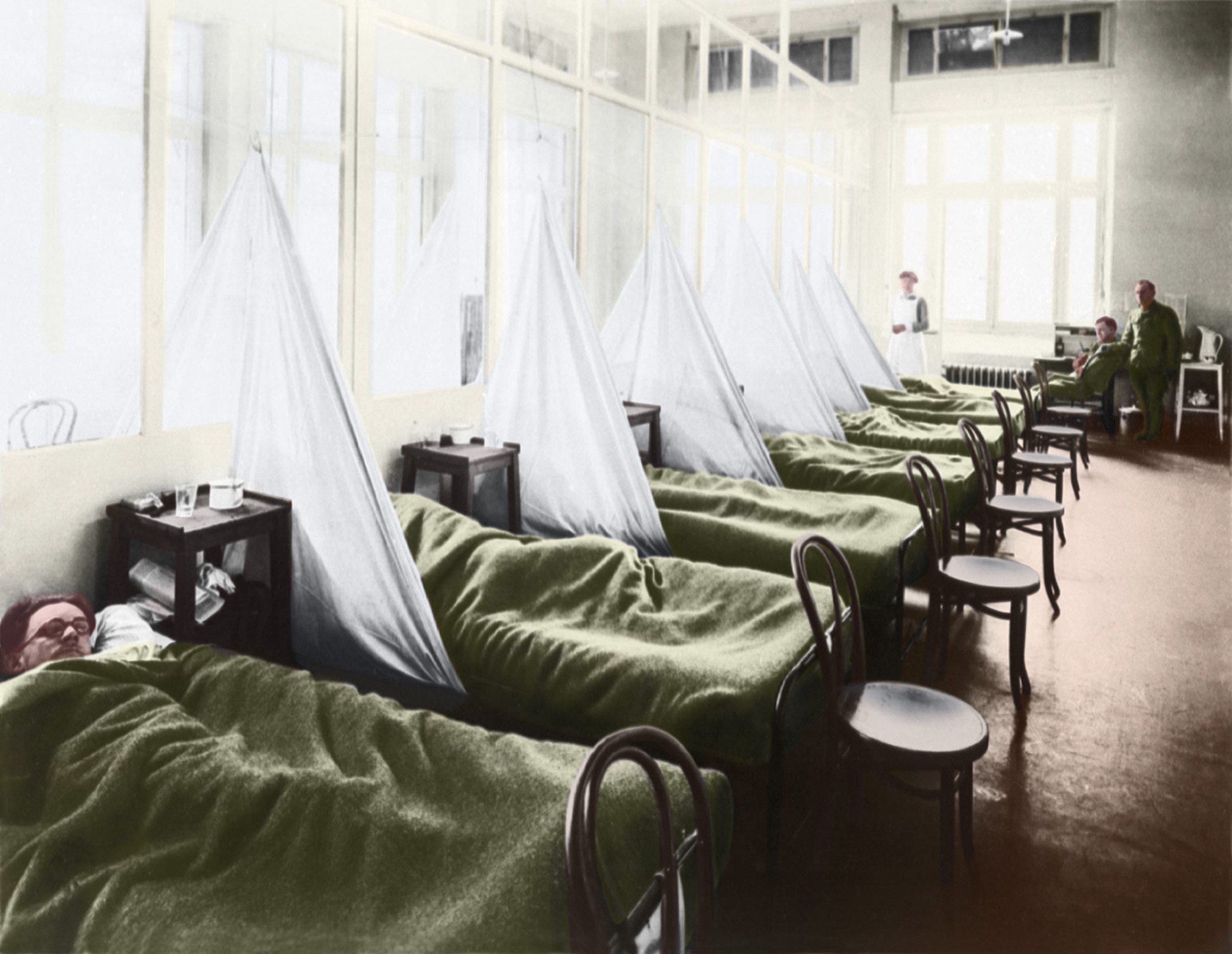 US Army “Flu Ward” in France

An influenza ward at the U S Army Camp Hospital in Aix-les-Bains France in 1918 during the Spanish Flu outbreak. 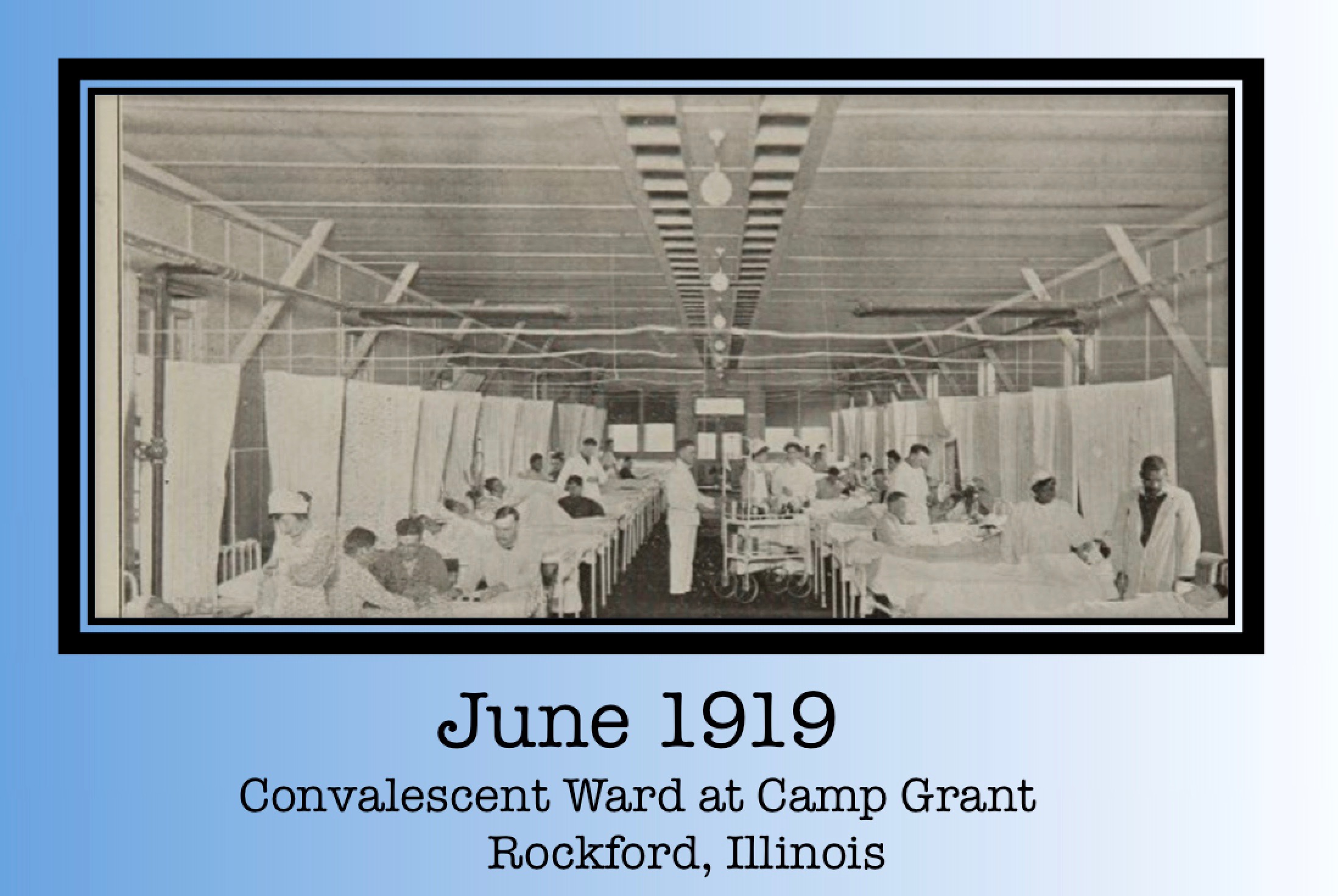 Soldiers infected with influenza and pneumonia filled the convalescent wards at military bases across the country.

In this photo that appeared in an article in "The Silver Chev" in June 15, 1919, it was reported that over 4,000 soldiers had been treated at Camp Grant in Rockford, Illinois during the influenza pandemic. The convalescent wards, corridors, porches, and tents were filled with soldiers. 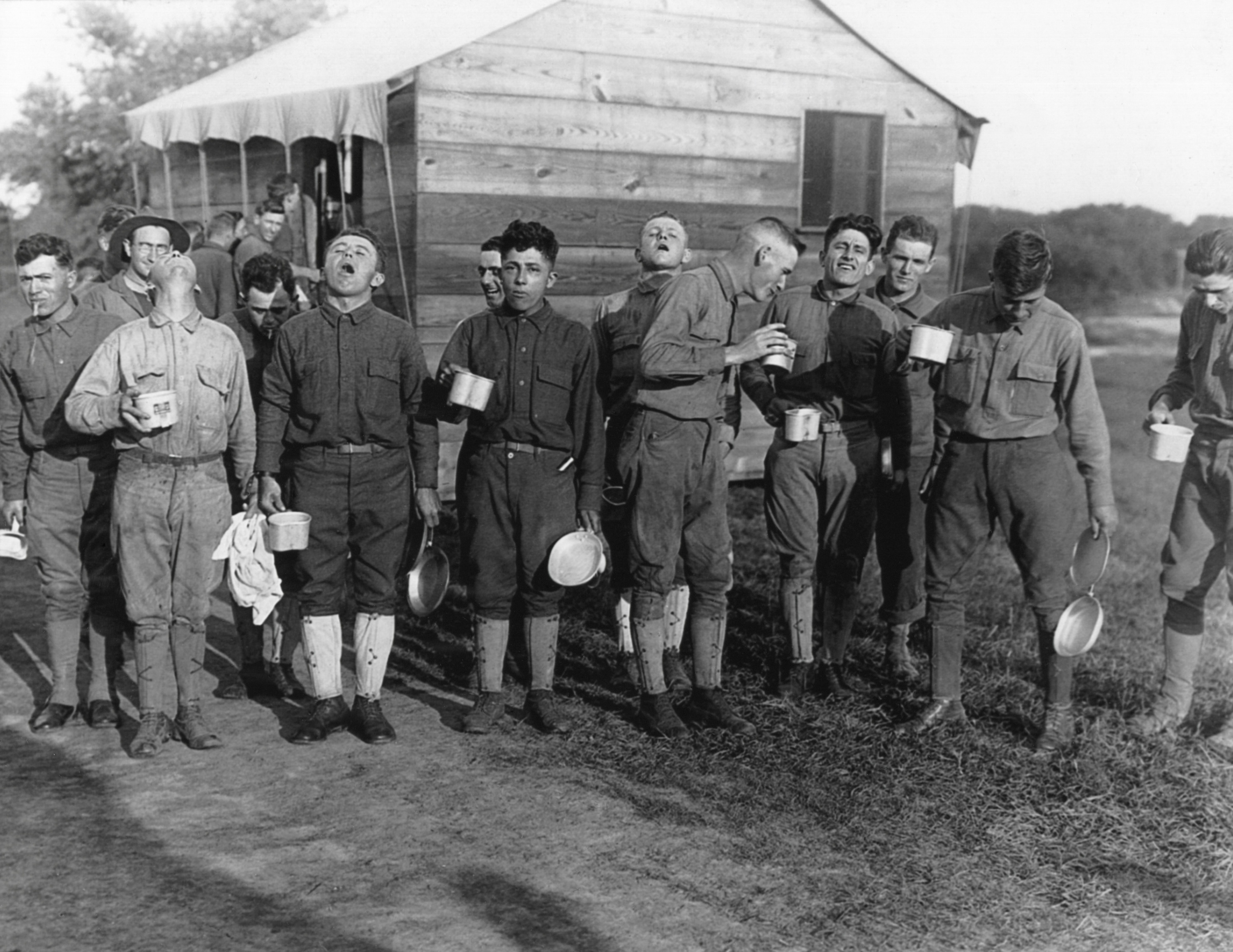 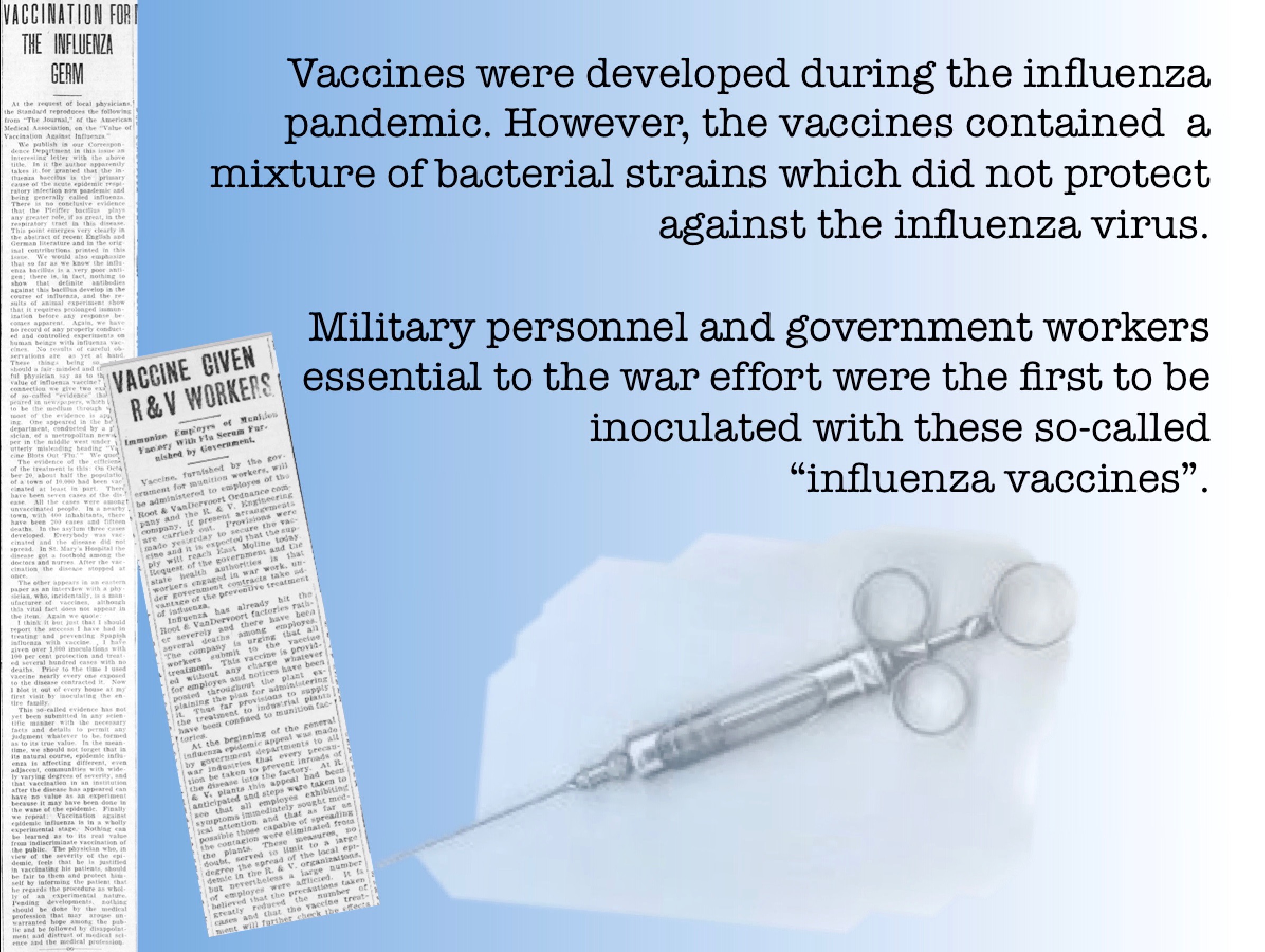 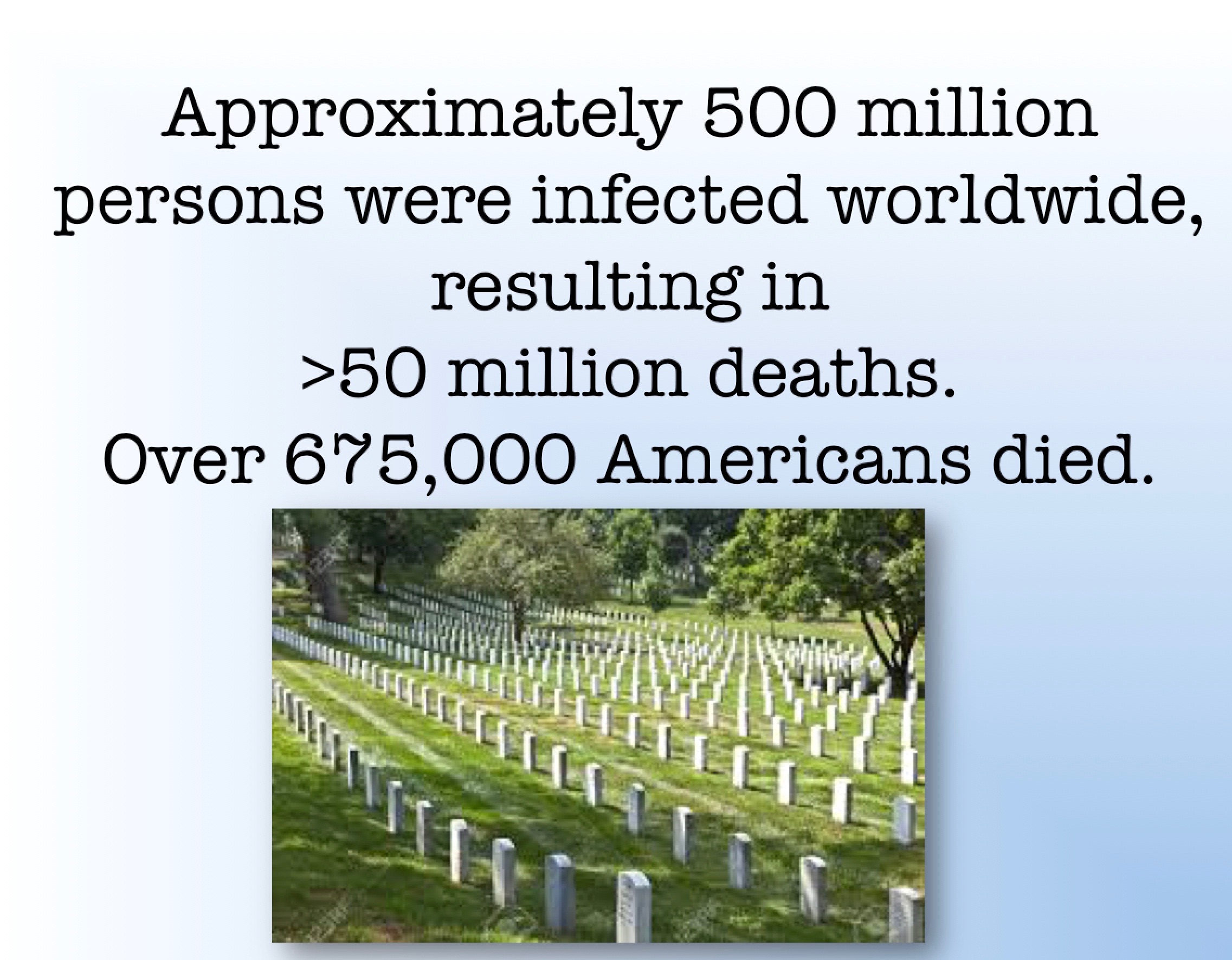 It is reported that between 50 million and 100 million deaths worldwide were attributed to the 1918-1919 influenza pandemic.
Due to the high mortality rate, resources were extremely scarce in many communities to deal with the large number of deceased in a short period. Some communities resorted to burial in mass graves. As a result, there are no grave markers, headstones, or burial records for a large number of those who died during the influenza outbreak.

In the two month period from September 14, 1918 to November 10, 1918, the number of deaths in the USA attributed to influenza and pneumonia following influenza was triple the number of American military lives lost during World War I. 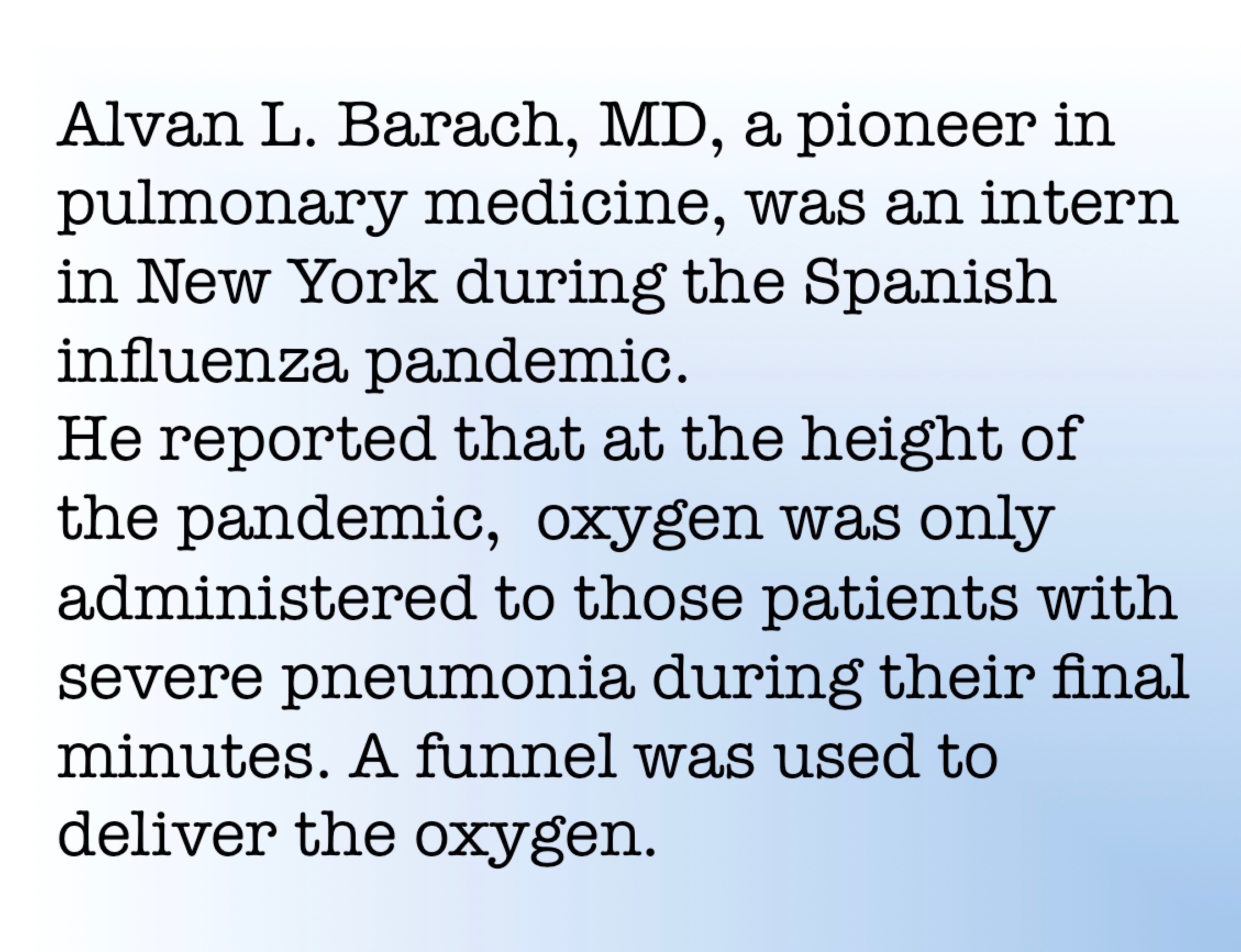 Many infected with the influenza virus during 1918-1919 developed a severe bronchpneumonia. The vast majority of deaths during the influenza outbreaks were attributed to the bronchopneumonia, not the influenza itself.
Oxygen was rarely administered to patients at the time of the pandemic.
Around the time of the influenza outbreak, John Haldane designed a mask to administer oxygen to WWI soldiers affected by poisonous gases on the battlefields but such devices weren't available in the hospitals and makeshift infirmaries set up to treat those dying from pulmonary complications that followed the influenza. Dr. Alvan Barach indicated that during his internship between 1918-1919, he used a funnel to administer oxygen to those who were near death from influenza complications. 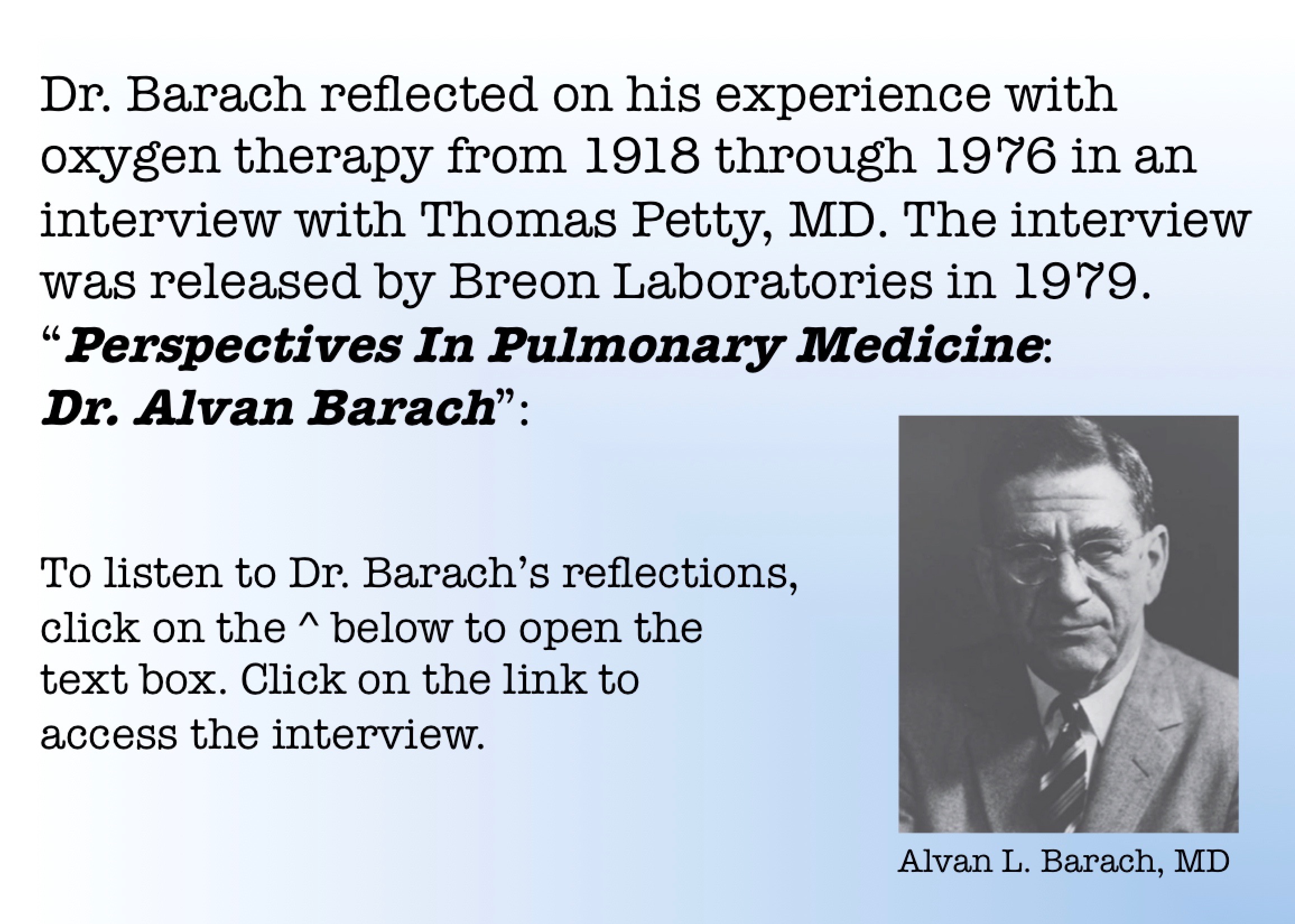 
Dr. Barach's experiences during the 1918-1919 influenza epidemic are discussed in the first few minutes of this audiofile. 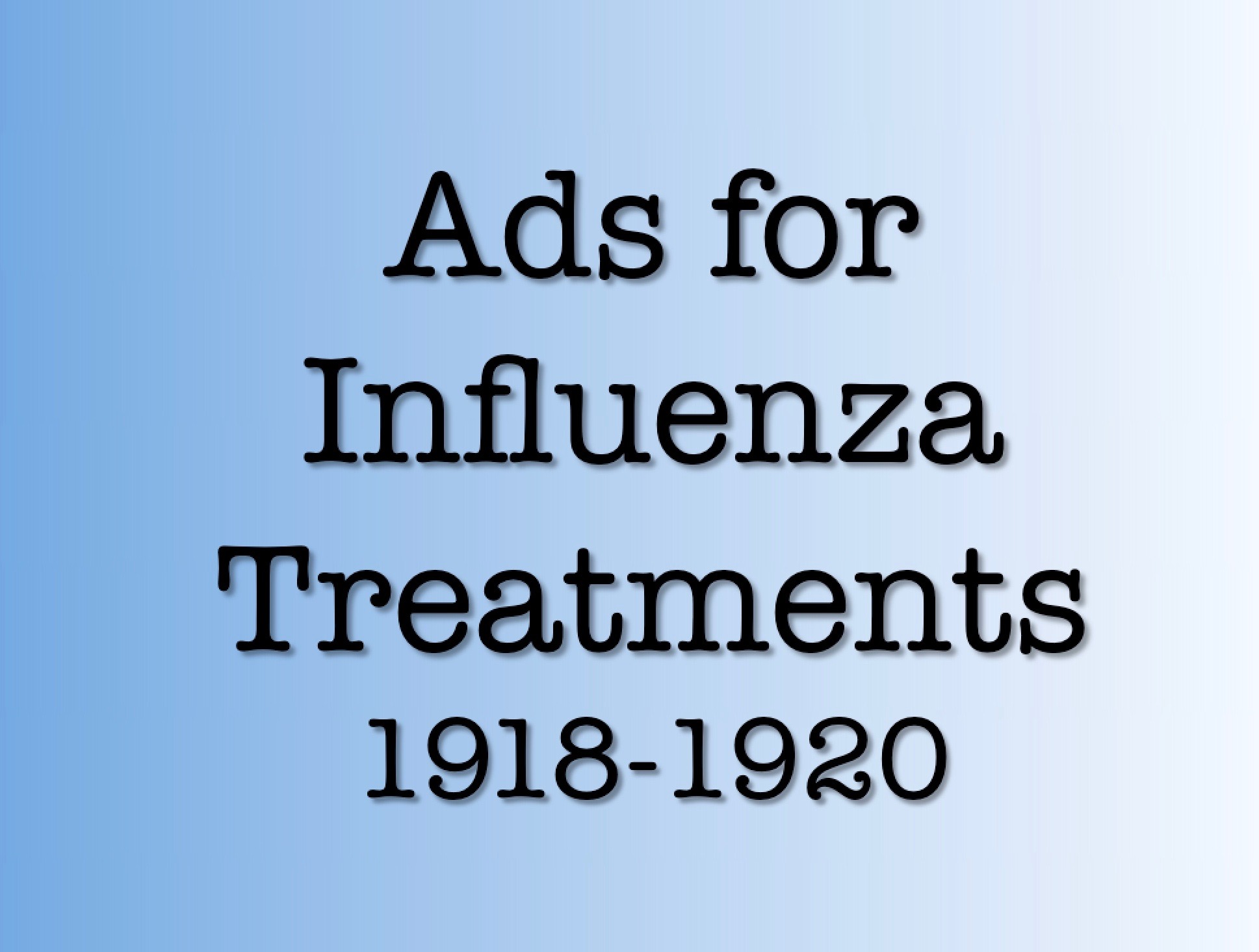 A few vintage ads for influenza treatments and preventatives that appeared in newspapers between 1918 and 1920 are included. 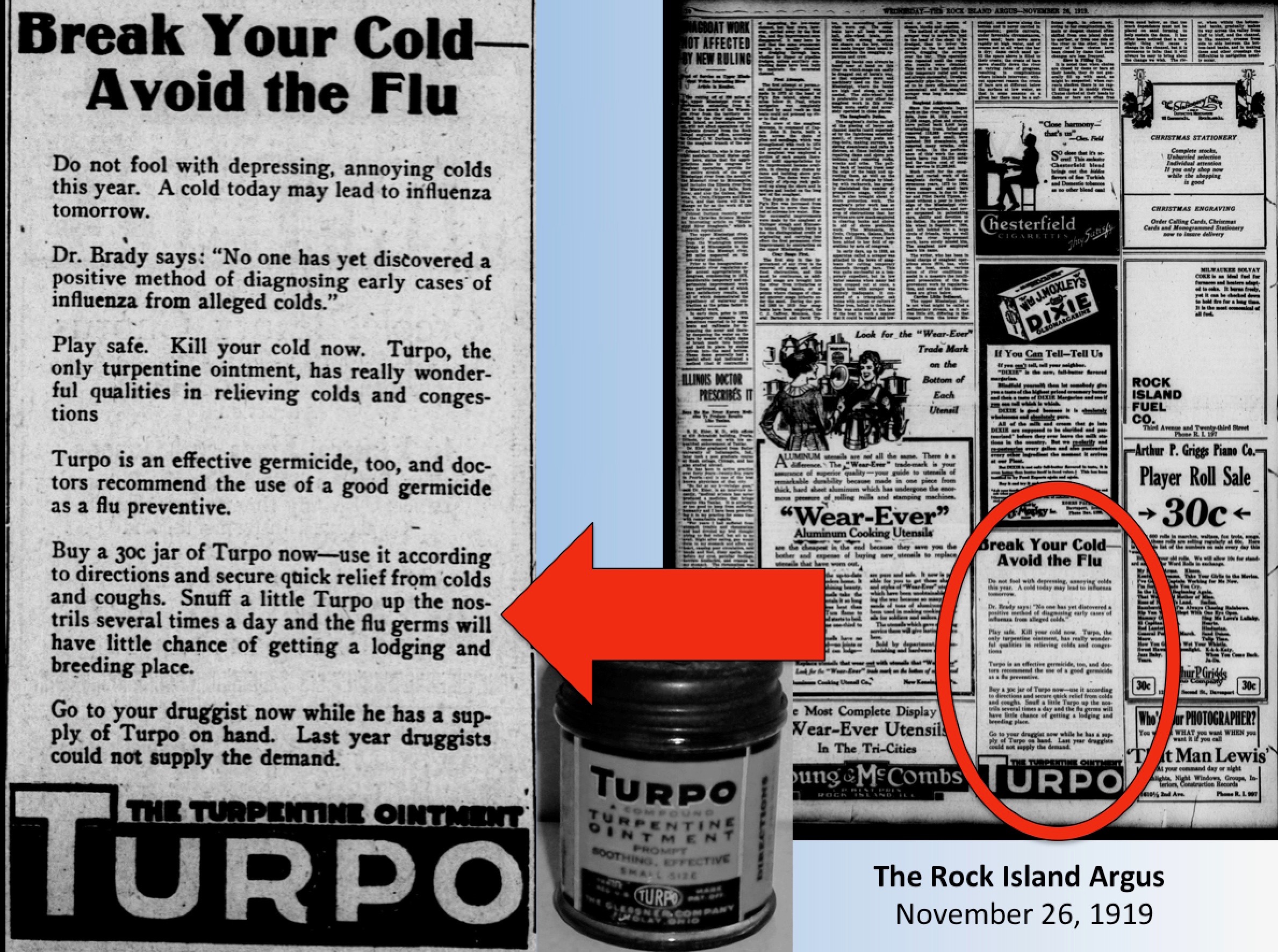 In this November 1919 newspaper ad, Turpo (turpentine ointment) was recommended to be snuffed into the nostrils multiple times a day to prevent "flu germs from getting a lodging and breeding place." 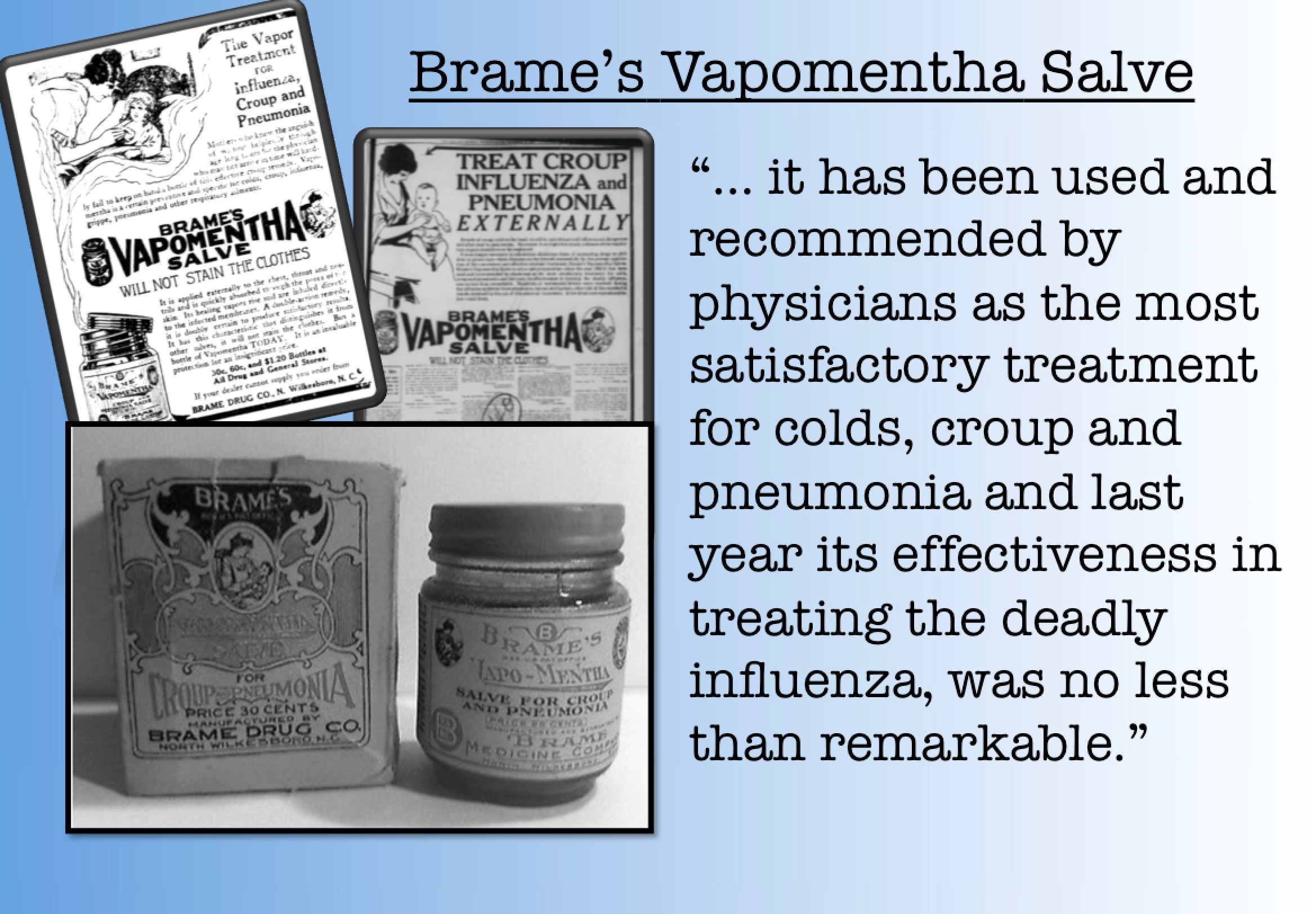 Newspaper ads in 1919 for Brame's Vapomentha Salve stated that the salve “…has been used and recommended by physicians as the most satisfactory treatment for colds, croup and pneumonia and last year its effectiveness in treating the deadly influenza, was no less than remarkable." 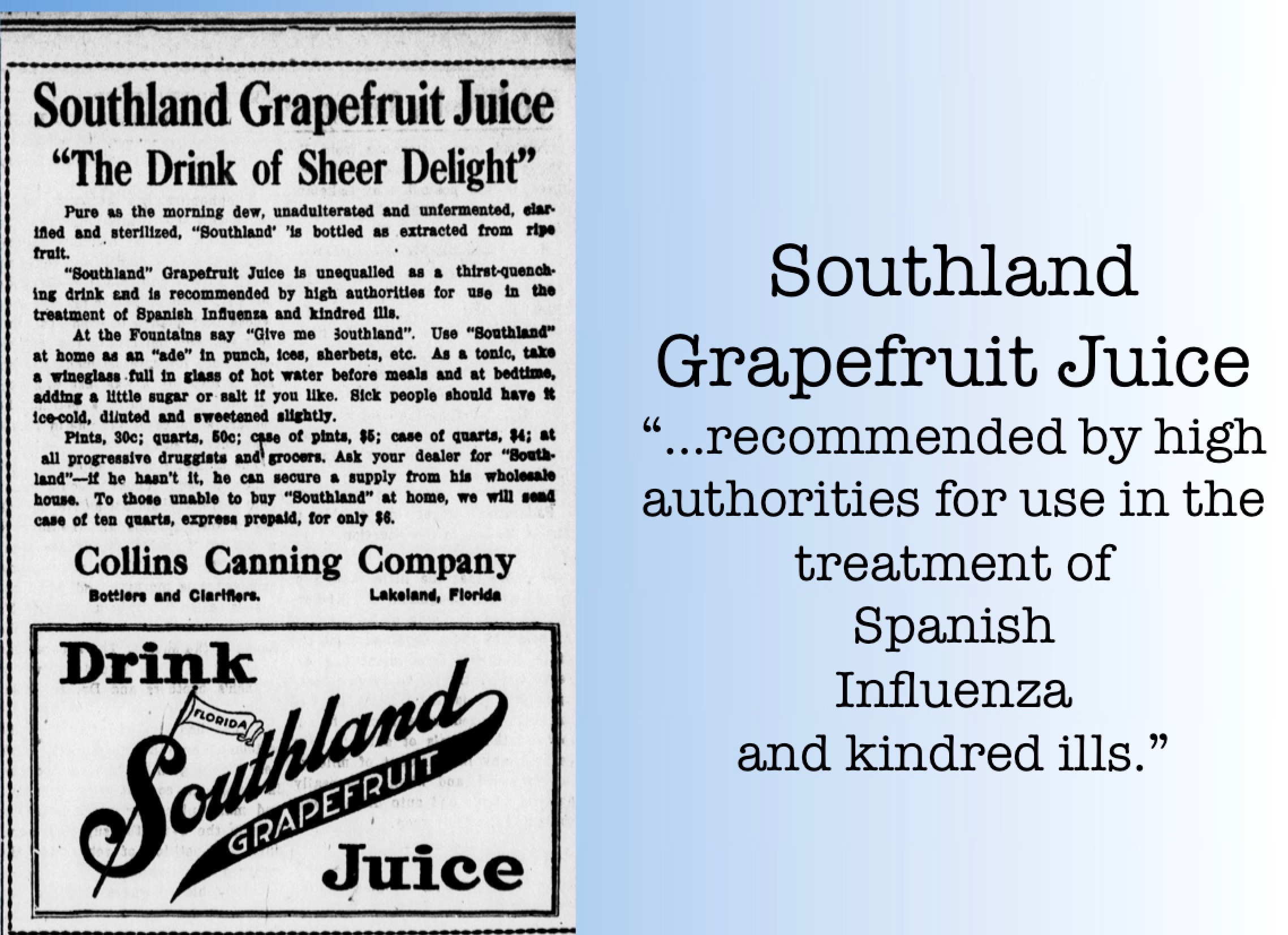 This ad which appeared in the January 21, 1919 edition of the Lakeland, Florida newspaper, The Lakeland Evening Telegraph, grapefruit juice was promoted as a treatment for "Spanish influenza and related ills." 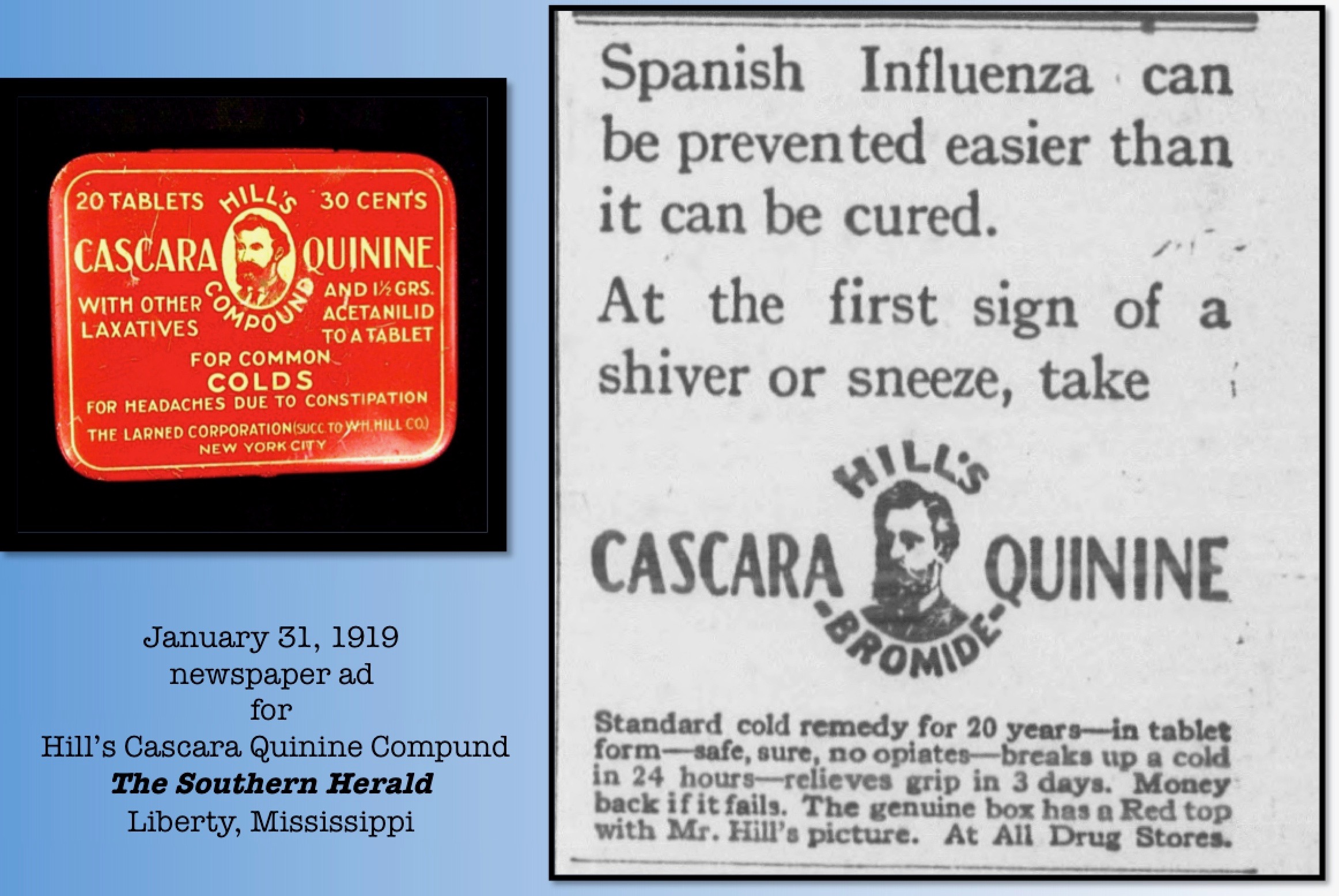 This January 1919 newspaper ad stated that "Spanish influenza can be prevented easier than cured." The ad promoted Hill's Cascara Quinine Compound which apparently treated "the common cold and headaches due to constipation." 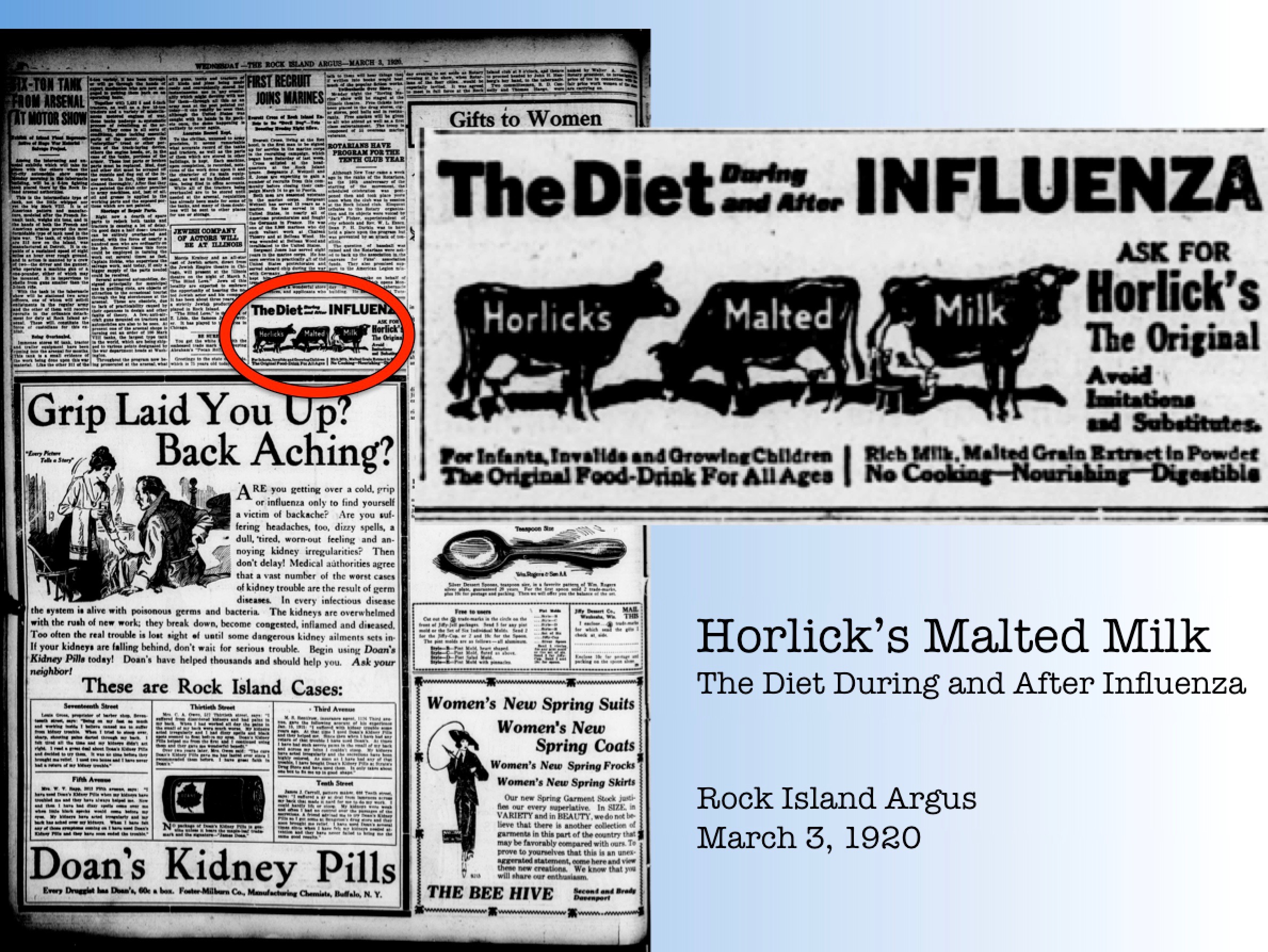 This ad promotes "Horlick's Malted Milk as the diet for and during influenza".
This ad appeared in the March 3, 1920 issue of the Rock Island Argus, a newspaper published in Rock Island, Illinois. 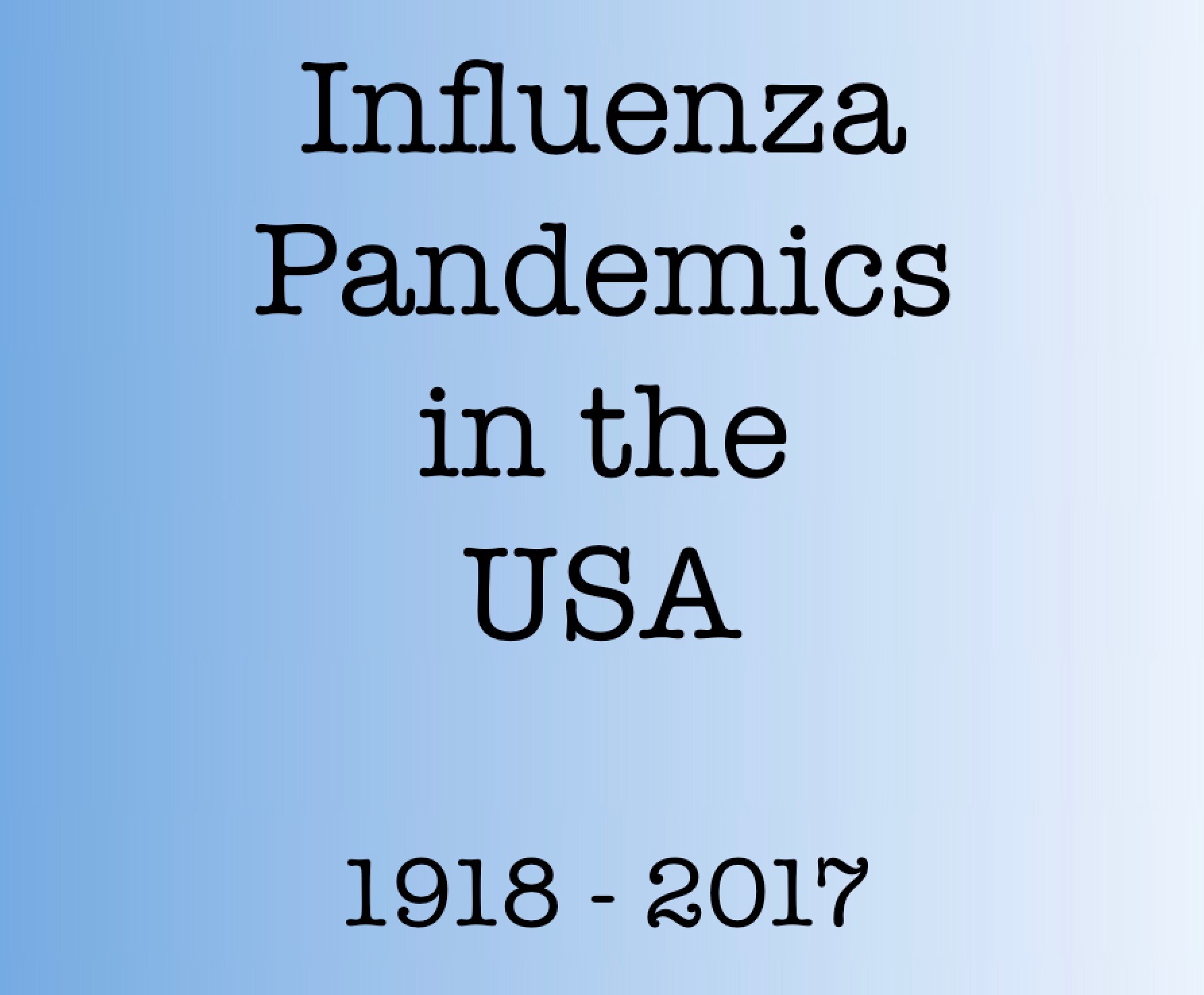 Since the beginning of 1918, four influenza pandemics occurred in the United States. 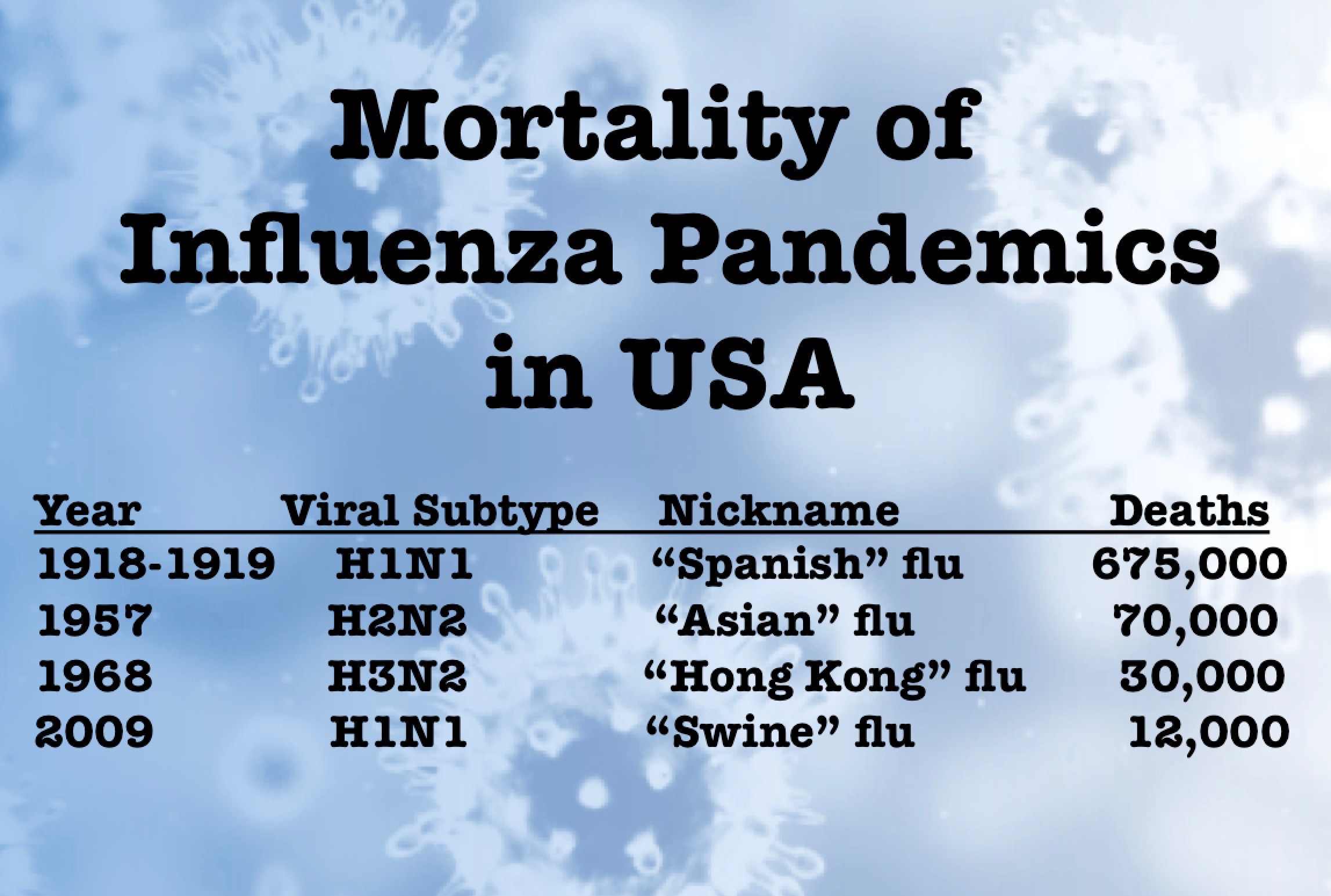 Flu Pandemics in the USA

The dates, subtypes of Influenza A, and reported deaths are shown for four influenza pandemics in the USA.

The information for this slide was presented by Dr. David Morens in a videocast: "The Mother of All Pandemics and Her Naughty Children" presented April 10, 2018 as the NIAID's 2018 John Ring LaMontagne Memorial Lecture. 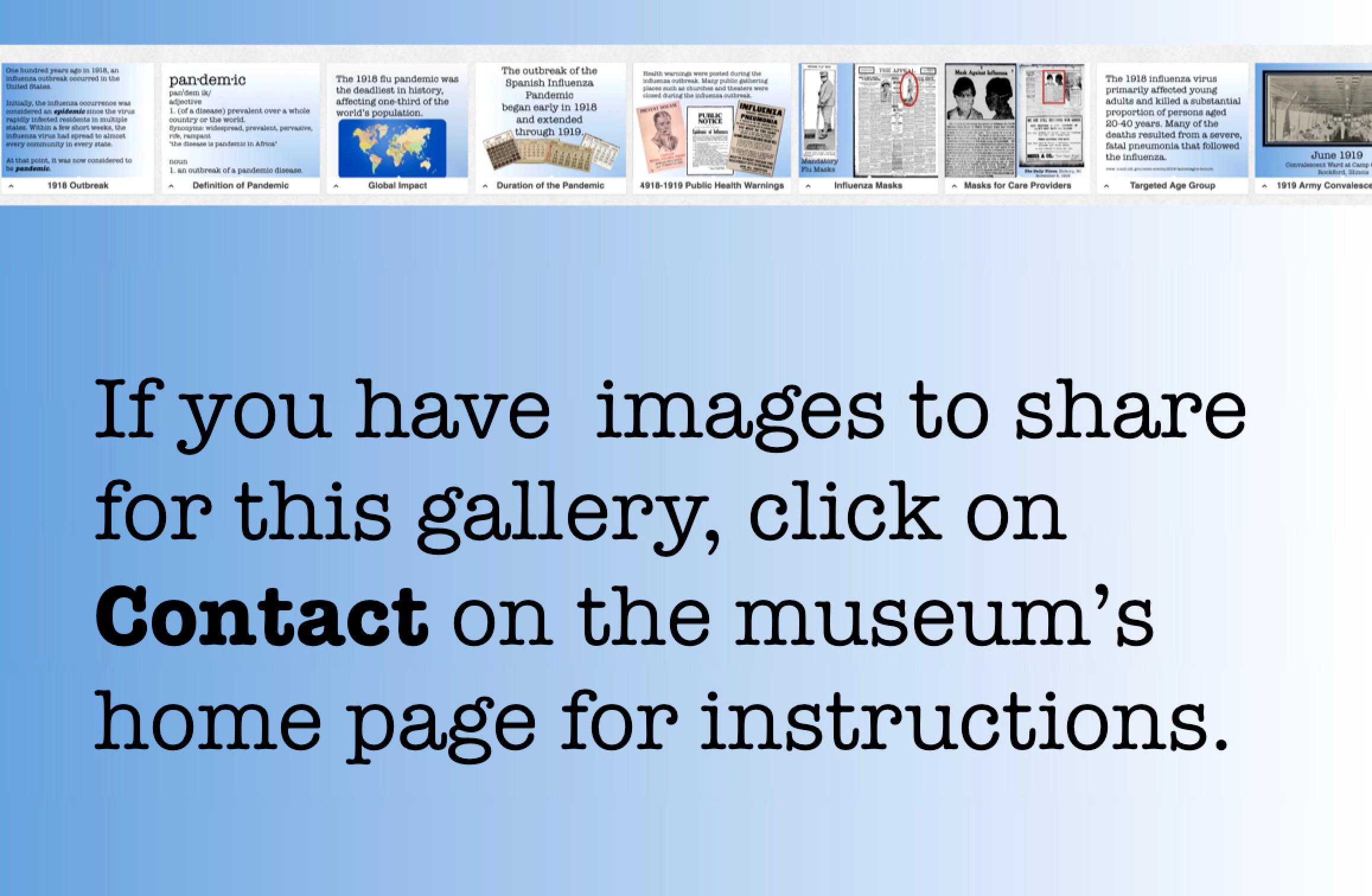